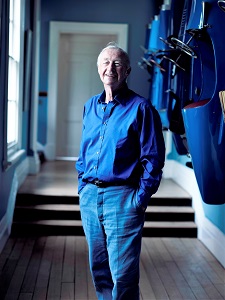 Octopus has paid tribute to Sir Terence Conran, who died at the weekend at the age of 88. As well as being a celebrated designer and author, Sir Terence with Paul Hamlyn co-founded illustrated publisher Conran Octopus.

As a designer, retailer and restaurateur Sir Terence enjoyed an extraordinary life and career that revolutionised the way we live in Britain. In 1964 he created Habitat, which brought good, affordable design to the high street. Ten years later he wrote his first interior design guide, The House Book (published by Mitchell Beazley, now an imprint of Octopus) and went on to write 50 more, including most recently My Life in Design (September 2016) and an updated edition of his manual for what he called ‘easy living' Plain Simple Useful (June 2020).

In 1985 he and Paul Hamlyn created Conran Octopus to produce informative but inspiring books about interiors, design, gardening and cookery, with authors who have included Gordon Ramsay, Monty Don, LEON restaurants, Dan Pearson, British Vogue and the Design Museum (founded by Sir Terence in 1989). The imprint is part of the Octopus Publishing Group.

Alison Starling, Sir Terence's Publisher at Octopus, commented: "Terence's belief that good design improves the quality of people's lives was core to his creation of Conran Octopus and with it he transformed illustrated book publishing. His legendary work ethic and passion for useful, beautiful books showed no signs of flagging. Octopus creative director, Jonathan Christie and I visited him for a book meeting at Barton Court last summer. The morning began with a tour of his glorious walled kitchen garden and ended with a glass of good white Burgundy but in between there was plenty of work to be done to ensure we had the best possible book. He leaves behind an extraordinary legacy and Octopus are so proud to have been his publisher."