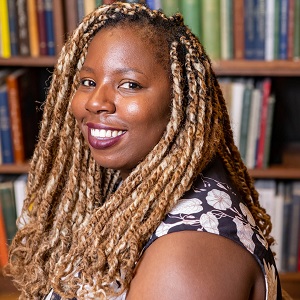 One of the striking things about Maame Blue is that for a debut author she’s also a rather keen observer of the UK book trade. Perhaps her time working with children's publishers contributes to her informed views on the deeper issues affecting publishing. Do you know, she asks me, that a Spread the Word survey from 2015 called Writing the Future said 56% of writers of colour remained un-agented through their careers? Since then, has the gap necessarily closed? Also, she adds, writers from a minority background are more likely to approach and be published by editors of colour.

Blue’s questioning of publishing’s inequality reflects too that she has come across more closed than open doors in the industry, forcing her to navigate her own path. A British-Ghanaian, she lives between London and Melbourne, and pursued publication even when it looked unlikely. "It’s the non-traditional route," she confirms. So while she may not have a creative writing qualification or an agent (though not for want of trying), Blue is now a published author and currently promoting Bad Love - virtually, of course. She owes her breakthrough to a diversity campaign, #Twentyin2020, run by Black-owned independent press Jacaranda in collaboration with Words of Colour.

The aim of the independent press is to publish 20 Black British writers over the course of this year. "Jacaranda made a call out," Blue explains, "they cut out the middle man and threw me a lifeline."

Jacaranda flowering
Founded by Valerie Brandes, Jacaranda has the championing of Black writers as its ethos. With #Twentyin2020, she and the team saw the opportunity to drive that message home further, by giving debuts or seasoned storytellers the publishing deals they deserved. Among the cohort are fellow fiction writers Lisa Bent and Berni Sorga-Milwood, as well as non-fiction authors such as Tony Warner and Njambi McGrath, and poets Adjoa Wiredu and Habaq Osman.

"I think these initiatives are an incredible way to open doors that were previously closed," Blue says. "I saw the campaign online and thought, 'This is something I’d like to get involved with'. I felt like there was space for me in publishing, even though my background is in psychotherapy and I’m a self-taught writer."

Side-stepping any formal training has clearly not proved an unassailable hurdle. Blue is no stranger to seeing her words in print or hearing her voice on the airwaves. Her short stories and creative non-fiction pieces have appeared in Black Ballad, AFREADA, Litro Magazine, Storm Cellar Quarterly (USA) and The Good Journal. She will also be featured in forthcoming issues of the Royal Literary Fund Magazine and New Australian Fiction 2020, while co-hosting Headscarves and Carry-ons, a podcast about black girls living abroad.

Reflective of modern Britain
Bad Love, which started off in personal notebooks drawn from relationships both experienced and observed, is released at a pivotal moment for the book industry. Pressure from within and without has intensified on publishers, who are being urged to audit, assess and be vocal about their work in relation to black representation in the wake of the Black Lives Matter protests. The public, meanwhile, has rushed to buy books by Black authors in an effort to up their anti-racist reading. The official UK bestseller chart is topped by Reni Eddo-Lodge with her 2017 title Why I’m No Longer Talking to White People About Race, while Booker-winner Bernardine Evaristo and journalist and poet Akala are among others who are prominent in the lists.

What people are reading right now is, of course, a shift Blue is well aware of. As is the formation of the Black Writers’ Guild this month by Sharmaine Lovegrove, publisher of Dialogue Books at Hachette, journalist Afua Hirsch and author Nels Abbey. They have so far lobbied the "big five" publishers (Penguin Random House, Hachette, HarperCollins, Pan Macmillan, Simon & Schuster) calling for greater action to bring inclusivity to publishing.

"It seems like such a simple notion, that to have a broader range of voices you have a broader range of ideas and stories," Blue says. "Especially if you work in books; it should be so important. If you’re a person of colour working in publishing, I can see that you would be attracted to more diverse stories. That’s why we need gatekeepers in the book trade to not be overwhelmingly white." Now is the time for the book trade to address these issues, Blue adds. "It’s become a very protective of itself; it’s so slow to change and is not reflective of what the country looks like now."

Power in the process
There are notable figures in publishing, though, who have long been calling for significant change. Blue is keen to thank Jacaranda for her opportunity to be published, but also for its longstanding support for Black writing. "Jacaranda is small but has a big presence. What they have done is show bigger publishing houses with bigger resources that there’s no reason why they can’t do the same."

Furthermore, Blue is keen to stress that Jacaranda has ensured its #Twentyin2020 authors have ownership of the publishing process - a privilege not granted to many first-time novelists. "They introduced us to one another and we’ve almost created our own collective," she enthuses. "I’ve had input at every stage. From moulding my manuscript and getting it ready to be published, to choosing the book cover and who would narrate my Audible book. It makes you feel like you own the process, and that what we want to do and say has been down to us."

According to Blue, it’s not just Jacaranda but a whole community that has been behind her. "Previously, I’ve been commissioned by editors of colour; these are people who’ve been in the industry for a long time and provide a platform for new voices. They helped guide me in an informal way; then gave me a space to understand which direction I should take with my book, and the story I wanted to tell."

She’s keen to credit a few of these cheerleading individuals. First is Sharmilla Beezmohun, who runs Speaking Volumes, a live literature events organisation specialising in getting under-represented voices heard. "She’s championed writers of colour for years!" The author Nikesh Shukla deserves a shoutout too, Blue says. "I really look up to him; he’s always mentoring." Joy Francis from Words of Colour, a creative communications agency for writers of colour, has also proved influential. "She is constantly working, and at the end of this month she’s partnering with Spread the Word and UCL for a virtual development programme called Take Flight Hub for emerging Black and Asian writers."

'A new moment'
So we come to the big question: does Blue believe publishing is making meaningful change when it comes to diversity? "Yes, I do feel that; it’s a new moment," she replies. "Some people have been consistently talking about these issues, so it’s good to see it’s now getting picked up. If industries including publishing can look at themselves and try to make changes, it can only be a good thing."