The challenges and pleasures of translation 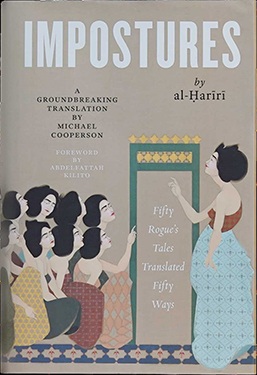 Michael Cooperson is the winner of the 2021 Sheikh Zayed Book Award for translation. He is an American scholar and professor of Arabic at UCLA, and has translated a number of works from Arabic, including his prize-winning translation of Impostures.

Not what I wanted to hear: I was one year into a two-year contract to translate that very book. But the skeptical speaker, whom I had just met at a conference, was Abdessalam Benabdelali, one of the Arab world's leading authorities on translation. And he had a point.

Impostures was first read aloud to the public in Baghdad in 1111 AD and soon became one of the most popular works ever written in Arabic. (Reading your work aloud in Baghdad was the twelfth-century equivalent of a book launch.) The author, al-Hariri, had set himself the task of writing fifty short tales, each illustrating a particular kind of wordplay. One tale features ninety puns on legal terms. Another has the characters improvise palindromes. A third contains a speech that uses only the undotted letters of the Arabic alphabet: that is, only half of the total.

Oh, and all fifty tales are in rhyme. Not in verse (though the text is full of verses), but rather in rhyming prose, a form that English doesn't quite have. No wonder, then, that generations of would-be translators have thrown up their hands and confessed that Impostures is "impossible to convey in English" (that's Theodore Preston, whose 1850 rendering impressed very few readers).

Since I didn't have the option of giving up - there was, after all, that pesky business about a contract - I decided to try for equivalent wordplay. There are, it turns out, English novels written entirely without certain letters, and English poems that are fully palindromic. My version of Impostures contains imitations of these and many similar bits of parlor-trickery.

Another strategy emerged from the fact that each of the original tales is set in a different region, from Morocco in the west to Samarkand in the east. To mirror this feature, I cast many of the translations into a regional style that fits the theme of the original tale. The Morocco episode, for example, went into Spanglish, which is spoken on the far western frontier of the English-speaking world. And the Samarkand story went into Kiwi slang, since New Zealand - as seen from London, at any rate - marks the far eastern border of Anglophonia.

Finally, to replicate the incessant quoting and name-dropping that happens in Arabic, I used as many different literary styles as I could manage, drawing on authors from Margery Kempe and John Lyly to Mark Twain and Virgina Woolf. Just as al-Hariri set out to show off everything Arabic can do, my Englishing tries to show off what English can do, or at least to suggest that it can do a heck of a lot if we put aside the idea that a translation should cling timidly to just one voice.

From one of Benabdelali's books I later learned what he might have meant when he called Impostures untranslatable. An untranslatable text is one that deals with an area where cultures are genuinely different. Faced with that sort of material, he says, translators should not give up, but rather render the passage over and over again in as many different ways as they can manage. This is the translator's job: not to make everyone sound the same, and not to make too much of a fuss about difference, but to bring readers into a space where many kinds of understanding, and many kinds of enjoyment, are possible.

Applications to the Sheikh Zayed Book Award Translation Grant are now open to publishers. To find out more visit the link here.