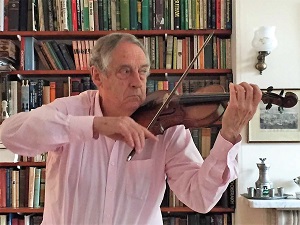 My family have asked me how, at a relatively advanced age in my late-70s, I ventured into writing and then seeing published my first "serious" book. After years of "dry" diplomatic and political consultancy writing, I had appreciated the literary freedom of writing in 2017 a monograph about my Stradivari violin, and then in May 2019 the Guardian obituary for my long-standing close friend, journalist and writer Dan van der Vat. Since some of my friends had told me that they regretted not asking their parents and grandparents questions about their lives, I decided to set down my own thoughts and memories - initially for private family use. Then, as the book developed, I thought about getting it published, and with wise literary advice from David Elliott and Peter Jacobs of Quartet Books I started setting it out more formally. Finally, I was able to use 2020 Covid lockdown time to complete the book.

The book endeavours to portray both my early professional and then private life as a musician, and subsequently my public diplomatic and later political consultant careers. The thread throughout the book is my love of playing music, and why I, against all "sensible" advice, decided to move to study with the illustrious Professor Max Rostal in Switzerland and to work there as a professional violinist. When I eventually decided that I had gone as far as I reasonably could as a professional, and had left it too late to become a top soloist, diplomacy happened by chance, as it was the only organisation that offered me an interesting job. In addition, my languages turned out to be an invaluable asset.

Enduring passion
However, music continued to be my passion, both playing with excellent chamber musicians around Europe to this day, and doing what I could working pro bono with arts organisations in Switzerland, Germany, Russia and the UK to help young musicians - which is a vital need, as I knew only too well from my own youthful experience. 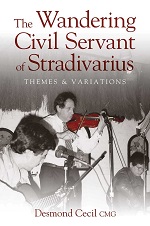 The chapter on diplomacy and the FCO is inevitably somewhat restrained, as I have had to respect Official Secrets restrictions. I have concentrated on my personal experiences, with anecdotal pen pictures, as well as stories from my UN press officer days which were already in the public domain, rather than submit serious confidential foreign policy matters for official vetting. In any case, these might be of less general interest 25-50 years later, and the main subject of the book is not foreign policy, but my personal reflections on events and people.

On the matter of balance: music and my violin turned out to be invaluable during my diplomatic career, both as an escape from the inevitable bureaucratic constraints and frustrations, but also as a unique way into the cultural life of the various countries in which I served. I was privileged to perform around Europe in concerts with local professionals or inspirational amateurs, which often made a significant additional impact to enhance official dialogues. A VIP diplomatic charity concert, when I was invited to perform Beethoven and Haydn in the historic FCO Locarno Rooms immediately after my FCO retirement in 1995 may be seen as fulfilment of this.

In both my diplomatic and subsequent political consultancy chapters I have endeavoured to portray what the various countries, their cultures and their people meant to me. This was especially the case in Switzerland and Germany, where I had worked first as a musician and then as a diplomat - and even more so in the window of post-Soviet, pre-Putin Russia, where as a political consultant I worked closely with Russian colleagues to tackle the daunting challenges of nuclear environmental restoration, which would have been unthinkable in the Soviet days. This was, of course, greatly enhanced by the personal dialogues which my languages permitted.

My Strad
People have wondered how I came to be in possession of such a valuable instrument as my 1724 "Cecil" Stradivari violin - from the master's sought-after late period, when he was aged 80, and still had 13 years of his working life to go. This is not quite as unlikely as it may sound, since over the years I had upgraded my violins, until I was fortunate to own a rare and valuable in its own right Guadagnini violin - which of course I had to sell in order to raise the money to purchase the Stradivari. Even so, I had to re-mortgage the house to find the money initially, and then repay the mortgage - which I was fortunate to be able to do because of my ongoing consultancy work.

When I finally decided, some 20 years ago, to look around for a top instrument, I saw many well-known violins that were way above my price range. However, the 1724 Stradivari was a relative bargain; partly because it was little known by the public, partly because it had been (expertly) restored in 1887, and partly because it had a "dead" tone through not having been played for nearly two centuries. I took something of a gamble in buying it, although less of a gamble than it might have been for some others, because of my own knowledge of the violin trade, painstakingly gathered over some 50 years. I was fairly confident about the violin's authenticity, as the world's experts have now confirmed, and - very importantly - that its tone would brighten out of all recognition with regular playing - as has happened.

In 2018, the international violin trade magazine The Strad ran a piece entitled "An Overlooked Wonder" about the violin, confirming its authenticity and qualities, and even giving it a formal name for the first time (as little is known about any previous owners) - "The Cecil".

And, of course, I was lucky enough to be able to acquire this wonderful violin, not as a financial investment, but to allow me the enormous privilege of personally making music through it - which has been and continues to be the joy of my life.

The Wandering Civil Servant of Stradivarius by Desmond Cecil is published by Quartet.