Alison Tweed reports from the Hargeysa International Book Fair, part of 'an astonishing revival of commercial and cultural activity' in Somaliland 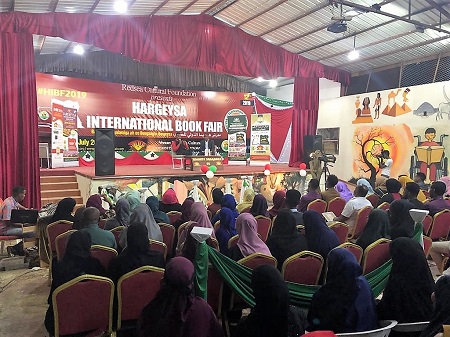 Somaliland lies south and east of Djibouti, facing Yemen on the Gulf of Aden, and has been a self-declared autonomous state since 1991. A long war with neighbouring Somalia left hundreds of thousands dead and the physical infrastructure of the main city, Hargeysa, devastated.

Since 1991, however, the city has been rebuilt, and is experiencing an astonishing revival of commercial and cultural activity, driven by the creativity and entrepreneurial energy of its residents and the support of the extensive worldwide diaspora. The HIBF is the flower of that cultural revival.

Now in its 12th year, HIBF is the vision of Jama Musse Jama, a doctor of mathematics (with a specialism in the board games of the Horn of Africa!), to promote Somali culture, literature and the importance of reading. HIBF is attended by an international audience, this year from 23 countries, and showcases its culture through lively debates, displays of traditional dance and song, poetry and performance, art and contemporary culture, with over 150 local artists and professionals taking part in the wide range of activities. Oh, and a book exhibition too: small and perfectly formed.

This all takes place out of doors in the Hargeysa Cultural Centre, a large compound with a library, gallery, public event spaces and café which in the five years since being opened by the Redsea Cultural Foundation has become a real hub for Hargeysa's residents and the perfect location for the fair.

This year's theme was co-existence, and the guest country was Egypt. The fair was opened by patron Edna Adan Ismail, former foreign minister, former first lady, an ardent campaigner against FGM and herself author of a new book, A Woman of Firsts, just published in the UK (HQ).

Highlights were the launch of Mary Harper's latest book Everything You Have Told Me is True: The Many Faces of Al-Shabaab, Somali-British author Nadifa Mohamed talking about her new book The New Daughters of Africa, and a multinational academic panel discussion on migration research - but there was so much more to stimulate hearts and minds and get people talking.

The small book exhibition - five or six stands of mainly local publishers - was there to make a statement about the rise in interest in book publishing, language and culture after many years of silence and suffering.

This was my first visit to Hargeysa, and I was there to visit Book Aid International's new partner in Somaliland, the Siilaanyo National Library, opened by Ahmed Elmi in 2017 with the vision to bring books and reading to all in Somaliland. The library is a vibrant place, much loved by young students in Hargeysa, and Ahmed has ambitious plans to expand its activities, including a camel library for the large and dispersed nomadic population.

I was pleased to take part in a session at the fair on the role of libraries and museums in state building, and the talk was well attended, with some lively questions afterwards.

Somaliland is a country in the process of reinventing itself: finding strength in its international networks; exploring its untapped wealth in natural resources; rebuilding its infrastructure and educating its people. The cultural revival embodied by HIBF is a hugely significant part of this renaissance. May it blossom, and grow.