Must a Black author's translator be Black? Further discrimination, Barbara Zitwer writes, is not the answer to historical injustices 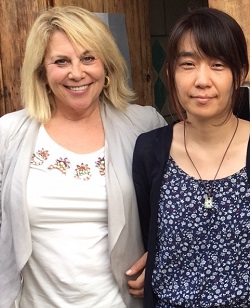 I have worked my entire career with marginalised writers whose voices and works would otherwise have gone unknown and unpublished. Bandi's The Accusation, smuggled out of North Korea, was a book I championed and sold around the world, despite the fact that I could have been hacked, phished and followed by the North Korean government. I led a group of international editors to the Freedom Bridge in the DMZone, and we all read Bandi's words in different languages, translated by multiple translators; we were a chorus for free speech. I was not afraid.

Throughout my career, from agenting Raif Badawi's The Voice of Freedom, to Patience Ibrahim's A Gift from Darkness (about her escape from Boko Haram), to The Girl Who Beat Isis by Farid Khalaf, I have never been afraid for my safety, business or mind.

While it is very difficult to promote unknown, unusual authors from far away who write in different languages and also defy powerful political forces, it's what drives me.

My latest challenge is a book called Practise Walking by Dolki Min, a self-published Korean queer, literary novel about a gender-bending alien who crashes to earth and hunts humans for food. It changes gender to appeal to its victim, has sex with them, and at their moment of orgasm, bites their heads off. This alien is only trying to survive and practise walking in the earth's atmosphere, where gravity is a disabling force. It's the hottest book that nobody has read yet.

"I am seriously worried about the state of translations, and about freedom in creative writing"

A few weeks ago, my computer and emails were hacked; the culprit, pretending to be me, approached Min to get the Korean PDF. It seems this is a very sought-after book, and the centre of a cyber crime investigation. I find myself talking to investigative journalists and the FBI cyber security crimes unit on a daily basis. Maybe you also have been hacked and imitated online. While it is frustrating and unnerving, I am not afraid.

Throughout my experiences with either the North Korean government or cyber criminals, I have never felt despair or fear. But this week a new kind of threat has come to my door, and this one does have me scared.

The "imagination police", in the form of editors at publishing houses in New York, are behaving in a way that gives me, and translators and authors, pause and dismay. The Amanda Gorman case, in which potential Dutch translator of her verse Marieke Lucas Rijnveld was discarded (along with other brilliant authors in Catalan and Spain) for not being ethnically suitable, sent a shiver down my spine. Now I am seriously worried about the state of translations, and about freedom in creative writing.

Most of the authors I work with require translators. We do not discriminate against translators for their ethnicity, religion or race. The Amanda Gorman situation was alarming both for translators and for those of us who work with authors in translation. Commissions are being based, not on talent, but on ethnicity or race.

This week, a brilliant translator of Korean literature was considered for a book we just sold to a Big Five publisher. We were asked if he was Korean, because the editor thought it was important to have a Korean translator. What difference should it make?

Did the editor know that Deborah Smith, translator of the International Booker Prize winner The Vegetarian by Han Kang, is British and white? Or Br.Anthony, known as the grandfather of Korean translators and awarded an MBE, was born in Oxford to British parents?

How about Howard Goldman, a Jewish translator who is behind Mo Yan's Nobel Prize win, and Antonia Lloyd Jones and Jennifer Frost, who translate Olga Tokarczuk? I don't think either is Polish. Alison Markin Powell, Bill Johnston, Anne Goldstein… the list of esteemed translators of great literature is voluminous. These translators are accomplished and correct for each author because of their talent, not because they come from suitable backgrounds.

The same day, another editor told my associate handling a wildly imaginative YA recreation of Tiger Lily from Peter Pan, that her company did not publish indigenous stories by non-indigenous writers. The author of this incredibly accomplished book happens to be Jewish from Baltimore, and Peter Pan was his favourite book as a child. He always wondered about Tiger Lily and what had happened to her. When he grew up to become a writer, she is the character he wanted to write about. Is this wrong? Is this bad? I don't think so!

It is true and shameful that writers of colour and different races and ethnicities have not been published in America and the UK in the numbers and with the passion, care and fanfare of white writers. The publishing business in New York, where I live, is not only white-centric; it is wealth- centric. How could any person without independent means live here on a publishing company salary and survive? Most of the editors, editorial assistants, publishers, scouts and others working in publishing here are white, well-to-do or well-connected, and have gone to top universities that cost a lot of money. There's a wealthy white pipeline that feeds publishers in New York.

"If a Palestinian writer wants to write about an old Jewish mother in Brooklyn making latkes, that's fine with me"

Writing in the Guardian, books reporter Alison Flood noted "a key finding of the study was that writers of colour and their books are 'either whitewashed or exoticised' to appeal to what UK publishing sees as its core audience of white, middle-class readers".

In addition, writers of colour "are disadvantaged during each key stage of the publishing process, from finding an agent to having to 'fulfil certain expectations of what white, middle-class editors want' with their writing in order to land a book deal".

However, the cure to lack of diversity is not to discriminate. The answer is to produce more books by people of colour, and to have editors, publishers, illustrators, publicists and staff of colour. What I see happening, sadly, is that in reaction to all this, publishing companies are enacting blanket rules such as those my translators and authors are running up against. If you're not Korean, you shouldn't be translating Korean works, etc.

The way to become more inclusive is not to limit the creativity, imagination and freedom of writers and translators. If a Black cisgender man wants to imagine being a white female French ballerina in Paris - wonderful! If a Palestinian writer wants to write about an old Jewish mother in Brooklyn making latkes, that's fine with me. Every writer should tell the story they need to tell, not be discouraged from writing it because of their race, religion or an insistence they stay in their lane.

If translators are prevented from translating books that do not reflect their race, culture, ethnicity or religion, it will be the end of us.

My young translator was so shocked when I relayed the conversations and issues to him. He said he'd be out of a career. And what about me? An American granddaughter of Russian Jews living in New York representing Korean literature and other global writers. Should I be allowed to continue representing the authors who are not of my background?

How about you? I haven't yet heard of agents being targeted for representing writers of other nationalities. Maybe it is only a matter of time?

It is our job to push back against reactionary rules and directives that are discriminatory. The way to improve representation of minorities and people of colour in publishing and translations is to publish more, but not to prevent every writer and translator of any colour, race, religion or gender to express their creativity in the fullest way of their choosing.

For the first time, this week, I felt scared.