'Put simply, it's a world I know, and I wanted to share it' 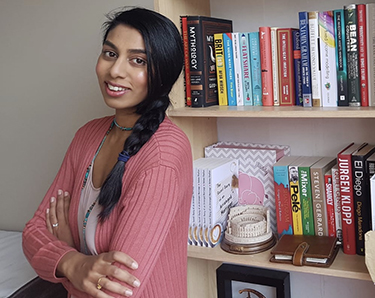 In April, Halima Khatun was revealed as the winner of the adult fiction category of the 2021 Selfies Awards. Her novel, The Secret Diary of an Arranged Marriage, is a sharp, funny 21st century take on the British-Bengali marriage market.

How did you find inspiration for The Secret Diary of an Arranged Marriage?
Though it's a fictional story, The Secret Diary of an Arranged Marriage did take some inspiration from elements of my life and others. Put simply, it's a world I know, and I wanted to share it. For those from the Asian/Muslim community, I hoped to provide some familiarity and a story that speaks to them. For everyone else, I wanted to lift the lid on a much misunderstood world that they've heard about and are perhaps intrigued by.

Your main character is so full of life and humour - how did you create her voice?
I wanted the main character to be dry, self-deprecating and self-aware, kind of the opposite of a textbook female lead. It just so happens that I'm much the same so the voice came naturally! That said, it was great fun creating a character and putting her in positions I would never dream of and have her say things I wouldn't dare! 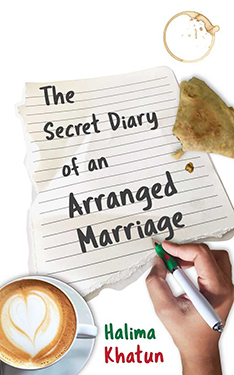 Can you tell us about your writing process?
My writing process is perhaps different from most. I am a former broadcast journalist turned PR consultant, so I've always been writing. I'm also used to writing on the hoof, creating stories at short notice, etc. This clearly came in handy for my book! As a busy mum of two under three, I rely on dictating into my iPhone notes for a very basic draft. This means writing in 10 minute bursts, which is a process I learnt from other authors. The idea is you just throw words down for about 10 minutes, in a bid to get into the habit of writing consistently and regularly. I try to do this every day, though this doesn't always work out with my small babies vying for my attention! Then, after ignoring the manuscript for a couple of weeks, I take that very rough draft and self edit, adding in context, colour, etc. Then it's off to my beta readers, who add invaluable feedback, before going to my developmental editor. Finally it has a professional proofread. Oh, I forgot to mention, I probably self edit it gazillion times in between. So it's quite a process, not that dissimilar to traditionally published books.

Are there any authors who have particularly inspired you?
My love of books was ignited as a little girl when reading Judy Blume. I loved how the books tackled serious issues without being too heavy. As a young adult, I did my university dissertation on Asian women in literature and fell in love with the work of Zadie Smith. Her humour is excellent as well as her portrayal of characters from different backgrounds.

What drew you towards self-publishing?
Initially, I didn't know much about self publishing and assumed I would go down the traditional route. However, I didn't like the idea of endless query letters, as well as the lack of control over publishing timelines and other aspects of the traditional route. Also, I really wanted to control the narrative of my story, as often women of colour are misrepresented or even exoticised in literature. I think this comes down to the lack of representation in the industry as a whole. So I decided to take the plunge and publish the book myself. I wanted to make sure that I could level up with the traditionally published books by hiring a professional developmental editor and cover designer and execute a marketing and PR campaign. As a PR consultant and former journalist, the latter came quite naturally to me.

As a self-published author, how do you find balancing marketing and publicity with writing?
I'm a PR person by trade, so I rather enjoyed the marketing and publicity side of things. While I focus on writing and getting words out, I personally believe that you should start marketing your books from the beginning, and build your brand. This is slightly different to what many self-published authors suggest, which is to wait until you've got a few books out to get more bang for your buck. But for me, I found that generating publicity early on for the first book, helps build an audience for the second and subsequent books. Also, as mentioned, publicity is something that the traditional books are known for, so as a self published author, I wanted my books to sit alongside them on the marketing front.

What have you found to be the most effective publicity and marketing tools for self-published authors?
I am going to sound like a broken record here, but column inches are king! Not only do they provide gravitas and authority, as well as an excellent third-party endorsement for my books, a lot of publications are now online, so I get a second boost in terms of Google ranking and linkbacks. Also, I always share any publicity across my social media pages, website, mailing list, etc. This adds further gravitas and helps create marketing touchpoints for people who may be warm to my books but haven't purchased. And for anyone who thinks PR doesn't help sales, a recent reviewer of my book said she bought it after reading about it in Good Housekeeping magazine! But PR is much more than a short term sale, it's part of a longer term strategy in my author business arsenal.

Can you tell us about any projects you’re working on at the moment?
I’m currently working on the third book in the Secret series, which follows the protagonist on her journey. I'm also planning a series of non-fiction books around helping authors and small business owners generate money-can't-buy publicity by themselves.