The zeitgeist will get you in the end

RN Morris kept his head down while writing his new novel, and lifted it to discover that two new TV series were set in the same world. 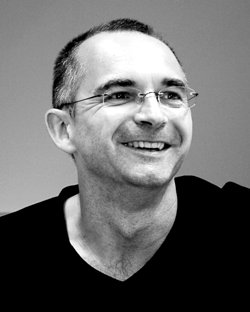 Some writers are better at sharing works in progress than others. I'm one of the worst. I keep my thoughts jealously locked away. I dare say I even develop a hunched posture, curving myself around my precious ideas, like a miser over his tin of coins. My focus is fiercely inwards.

The wall I erect to keep others away from what I'm working on also serves to close me off from what anyone else might be up to. I don't want to know. I stick my fingers in my ears and sing la-la-la. Not listening. Don't care. There's only thing I fear more than someone stealing my idea, and that is that I might be working on an idea that someone else has also had.

So the whole notion of a zeitgeist, and the possibility that I might be part of it, is a difficult one for me to grasp. As far as I'm concerned, you can keep your sodding zeitgeist. I want no part of it. I tap my dark seam alone, deep in the bowels of my solitary subconscious.

And when I come up for air at last, and sniff the cultural breeze, the last thing I want to discover is that there are two mainstream TV series set in a milieu not a million miles away from my next, fully completed but as yet unpublished, novel.

The two series I'm referring to are The Paradise and Mr Selfridge, respectively the BBC's and ITV's autumn period dramas. And the milieu in which they are set is that of the department store. The Paradise is based on Zola's novel Au Bonheur des Dames, more usually translated as The Ladies' Paradise. Set in 1909 and created by Andrew Davies, Mr Selfridge tells the story of Harry Gordon Selfridge, a man whose mission (according to the ITV press centre) was "to make shopping as thrilling as sex".

When I first saw the trailer for The Paradise, I broke out in a cold sweat. The scenes I was seeing looked intensely familiar. This is perhaps not surprising: not only have I read The Ladies' Paradise, but it has also provided part of the inspiration for my own novel, The Mannequin House.

I'm aware of the irony of protecting myself from contemporary cultural contamination, while embracing the influence of a 19th-century French novelist. In my defence, The Mannequin House started life as a novella for a French publisher, and the idea of referencing Zola seemed quite natural. (There were other literary influences too, not least Edgar Allan Poe, GK Chesterton, H Granville Barker, George Gissing, and Arthur Conan Doyle.)

If anything, this all goes to show the lengths I'll go to to avoid the spirit of the age - of my age, that is. I'm happy enough steeping myself in the spirit of a former age.

But the zeitgeist, the ruddy zeitgeist, has other ideas. We may not want any part of it, but it will have a piece of us.

The question is, why now? What is it about early department stores that suddenly compels the two main terrestrial channels to commission drama series (and one obscure writer to write a novel) set in them? Obviously I can only speak for myself as the obscure novelist. The theme of my novel is desire. I was drawn therefore to a setting which represented a universe of desire, and an era in which modern consumerism was born and desire became commoditised. My book is a detective story, and I have always considered detective fiction to be a sub-genre of surrealism (how else do you explain Chesterton's story "The Secret Garden", in which a decapitated head from one body is found next to a headless corpse belonging to someone else?). Desire is the archetypal subject of surrealist art.

Innocence, violence and desire were my preoccupations as I was writing. To me they seem perfectly valid preoccupations to have in the age in which we live. To confront them through historical fiction (or period drama) is not to indulge in escapism, but to acknowledge the undeniable link to the past that our presence in the world implies. We are two years short of the centenary of the Great War, the great cataclysm that heralded in the modern age. My series is set permanently on the eve of the War, a storm that perpetually looms but never breaks.

Perhaps it is a sense of this impending anniversary that draws me back. We stand at virtually the same point in the 21st century at which the War occurred in the 20th. If I am not the only one whose subconscious pulses in time with this particular cultural biorhythm, I should hardly be surprised.