Tim Westover named as winner of US Selfies Book Award 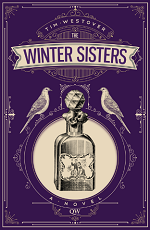 The first ever U.S. Selfies Book Awards winning prize was presented to Tim Westover, author of The Winter Sisters, last night. He received the award in a live virtual ceremony at the American Library Association’s annual conference, from Carl Pritzkat, president of BookLife, which administered the awards in conjunction with the award’s co-presenters, Publishers Weekly and BookBrunch.

Jo Henry, managing director of BookBrunch and a juror for the awards, said, "This is a brilliantly realized depiction of the conflict between new scientific theories and traditional herbal remedies, set in a small 19th-century community under threat of rabies. Will the superstitious townsfolk trust to the new doctor or the three sisters—witches to some, healers to others—to cure them? With excellent sales and a sound marketing plan, Westover is a worthy winner."

The awards are co-sponsored by IngramSpark®, Ingram’s award-winning self-publishing platform, and Combined Book Exhibit, which showcases published works at trade shows and expos around the world. Westover, in addition to receiving a $1,000 cash prize contributed by IngramSpark, also receives promotional book displays valued at over $2,500 from Combined Book Exhibit at major book fairs around the world and a $5,000 package of print and digital advertising in Publishers Weekly.

The mission of the awards initiative, which was the creation of BookBrunch and founded in the U.K. in 2018, is to discover new talent and reward the best self-published titles each year. The U.S. awards’ first year focused on adult fiction published during 2019. Future years are expected to include nonfiction and children’s books.
Share on Facebook
Share on Twitter
Download PDF