Faber and the Blitz spirit

In an introduction to the paperback edition of his acclaimed history of Faber & Faber, Toby Faber reflects on how the publisher has fared during the pandemic 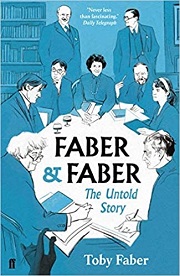 This paperback was originally scheduled for May 2020. I look back through my emails from the previous February and see discussions about the cover and worries about whether we are in time to make small corrections before going to print. In retrospect, it seems a time of innocence, of happy, purblind naivety.

Future historians will no doubt chart the gradual way in which we began to understand the impact Covid-19 might have on all our lives. Everyone will have their own perspective, but for much of the UK book trade the cancellation of the London Book Fair on 4 March 2020 was the real wake-up call. By the end of the following week, almost all of Faber's staff were working from home. On 16 March, Amazon announced that it would not be accepting non-essential items, including books, into its warehouses. Full lockdown a week later closed the last high street bookshops. The routes to market had dried up.

Those of us seeking comfort could look to the last great national crisis: publishing had survived the Blitz, even flourished, as the blackout encouraged reading. In the 21st century, however, books have to compete for leisure time with so many other pastimes - of which watching television is only the most obvious - and even the War did not close Britain's bookshops. I rather think the last time that happened was in the 1926 General Strike, right at the beginning of the story this book tells. Years later, my grandfather was still blaming that two-week stoppage for the failure of his one foray into writing fiction, Elnovia.

Publishers, including Faber, took the only sensible course and postponed many new publications. How could readers find debut authors, for example, in a world without bookshops and festivals? Yet new books are responsible for a huge percentage of book sales. Their cancellation left a gap that would be difficult to fill. April was the tensest month.

As lockdown continued, however, it became clear that people still wanted to read. Moreover, they were finding ways to buy books: from supermarkets and a multiplicity of online sources such as Waterstones.com or, more recently, Bookshop.org. Amazon rescinded that initial decision. Escapists turned to detective fiction, in which Faber has a long and distinguished history with the work of PD James at its core. In another part of Faber's list, sales of Sylvia Plath's The Bell Jar rose significantly.

"A lot of hard work was involved in that luck"

In May, Faber saw first-hand how television could be a friend to reading, after the BBC started streaming its adaptation of Sally Rooney's novel Normal People. The book leapt to the top of the bestseller charts, pulling Sally's first book, Conversations With Friends, along behind it. It could be seen as a classic example of publishing luck, but a lot of hard work was involved in that luck. Across the list, Faber's employees showed their creativity when it came to online marketing and adapted superbly to home working. Meanwhile, the firm had a bumper year for prizes - as good a short-term indication of its continuing editorial strength as you are likely to get.

In August 1943, four years into the Second World War, my grandfather told a friend in America that Faber was "riding high on the crest of the highest wave". It feels inappropriate to say something similar now, when another sort of wave is far from over - this epidemic has brought so much tragedy; many businesses and families are still suffering - but publishers can already state, with confidence, that reading remains as important as ever. Books have proved resilient once again.

The story told by this book ends in 1990. That is mainly because that was the year Faber took steps to assure the continuing independence that makes it so remarkable today, but it has the added benefit that I can look back on events with a sense of historical perspective.

The same cannot be said of any attempt to assess the past 12 months. I still feel safe predicting, however, that publishing is going to change. It is hard to imagine, for example, that we will be going back to spending five days a week in the office; the opportunities to connect online are so much richer now than they were a year ago. These seem like good developments, although I worry about the impact on retailers and on the wider cultural landscape such as theatres and concert halls.

There is likely to be one further lasting, important change. Geoffrey Faber was an excellent recruiter, but it was from a limited pool. I imagine that his version of an inclusive hiring ethos might have been to look for editors from Cambridge as well as Oxford. Publishing has changed markedly since his time, of course. Nevertheless, it took the protests that followed the awful, tragic death of George Floyd to force the industry into long overdue self-examination. Many publishers, including Faber, now appreciate with far more urgency that we must increase the diversity of the people that we connect with, publish and employ.

Faber & Faber: The Untold Story is out in paperback today (1 July).