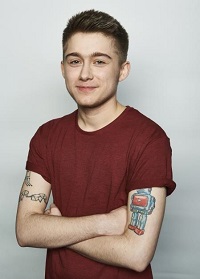 Wren & Rook has rights from Silvia Molteni at Peters, Frasers & Dunlop, and will publish on 2 November 2017, during Transgender Awareness Month.

Trans Mission: My Quest to a Beard will be a key part of the new non-fiction imprint’s personality-led list, focusing on exceptional narratives for teens and young adults, sitting alongside Hannah Witton and Rae Earl.

Bertie is a 21-year-old transgender YouTuber from rural Dorset who began making videos on sexuality and gender identity while at school, aged just 14. He’s documented his transition from female to male with weekly vlog updates, gaining over 255,000 YouTube subscribers to date.

Foy said: "We’re delighted to be publishing this brave first-hand account from Alex Bertie. The number of young people in the UK seeking medical treatment for gender dysphoria has risen dramatically in recent years. Alex has written a hugely important book revealing the practical realities of his transition, sharing personal advice for other trans (and non-trans) young people, but also exploring his ordinary life as a teenager – his relationships, love life and dreams for the future. We are thrilled to be adding Alex’s honest and heart-warming story to Wren & Rook’s growing list of personality-led titles."

Bertie added: "Documenting both the good and the bad of my transition has been an emotional experience, so I’m really excited for people to read Trans Mission. I hope the details of my journey will help anyone going through a similar experience, as well as their friends and family."
Share on Facebook
Share on Twitter
Download PDF