What noses know what?

Lochlann Jain's new book questions our assumptions about what belongs together, why and how 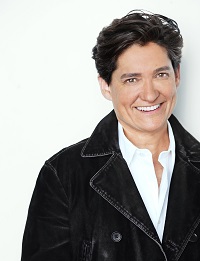 Awestruck and unable to help myself, one afternoon at a staff meeting I began jotting the likeness of a colleague's nose on my agenda. Soon enough, several noses emerged from my pen, which I put under a heading, "Kinds of noses." Right away with that first collection (my sister's nose, the nose of wine, a porcine nose, etc), an implicit set of questions arose. What noses know what? How do we distinguish noses? What noses are to be trusted? Thus began the gallery of sketches that became Things That Art. Who knew noses were so conceptual?

This form of the drawn mini-gallery, over the subsequent years and about 150 drawings, became a way for me to explore how meaning is made. Through on the one hand creating frictions among image, word, and collection, and on the other, making connections among meaning, sound, and the shapes of letters, I began to explore possibilities for knowing otherwise, disturbing fixed identities, and lateral thinking.

"My work aims to examine how things are similar - and thus, how meaning is made from relations that are often unpredictable, arbitrary, and even irrational"

Initially, 4x6 inch watercolour pads limited my scope for catastrophe; these became incrementally larger with my aging eyesight. The stamp-sized drawings were done in pen, from memory, without judgement, and as such many became friends. Such guidelines stymied any imposter complex and liberated me to simply draw a likeness of objects I had only occasionally or never seen: a salamander, a shadow of doubt, or a pirate. 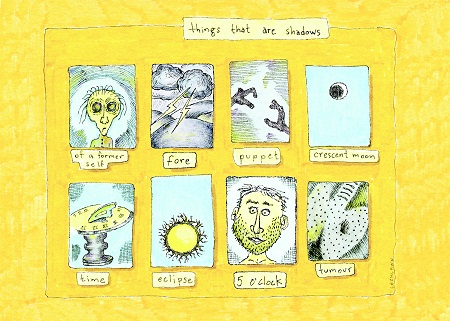 The form of my drawings will be familiar, invoking the picture postcard, the botanical colour plate, the baseball trading card. Zoos, art galleries, and museums adopt a parallel scaffold. Each framed or caged thing harnesses the same design principle as the lowly flashcard and child's alphabet book. Yet the seamlessness of the conjunction between word and image in these fundamental forms that produce and expound knowledge nearly entirely obscure the institutions, politics, and hierarchies that sift, sort, and collect these animals, humans, and things.

My strategy, then, became to adapt this framework to create little paradoxes and gaps where not everything - at first - matches up. The conceit of the project is that these gaps, at first appearing as mismatches, can be used to invite an audience to think with me about how categories work, and question our fundamental and deeply held assumptions about what belongs together and why and how.

Giving my pen over to the spontaneity of the form sometimes yielded groupings that I didn't fully understand myself, in part because of the arbitrariness of language that linguists and grand theorists have attempted to overcome since at least the beginnings of philosophy. While naming and organising the world and all that's in it has been something of an obsession among men with pens, those who have been squashed into categories for convenience or out of confusion do add a unique perspective. It was this outsider perspective I aimed to grasp.

I found that sets of categories allowed me to look at things slightly askance, and so I set out to access a range of these ways of looking. In this sense, the collection of drawings might seem at first to include some random categories. Sounds like hairspray just popped into my mind one day, as did the populating images and terms that are at once whimsical and yet fully belong to the collection because they do sound a bit like the word "hairspray". Across the mini-collections, my curiousity was piqued to think about the reliance of category headings in determining our thinking and constantly gauging what "belongs".

Consider for example the ways that gender-crossing has been described in different ways since, say, 1900. At some (most) points it has been illegal, immoral, or medically pathological to be gay, partake in certain sexual acts, or cross-dress. LGBTQIA people have also used different terms, codes, and concepts to describe identities and practices: queer, butch, queen, and so on. The "headings" under which these struggles take place vary from gender, biology, sexuality and religion, and these headings constitute the very terms of the debate.

My work, though, doesn't ask which things don't belong, but rather, aims to examine how things are similar - and thus, how meaning is made from relations that are often unpredictable, arbitrary, and even irrational. The world is not made of individuals and things, but rather, we all exist because we co-exist and make meaning with and for one another.

Categories are certainly useful. But they also constitute those who devise them, those who are concocted or ensnared by them, and the worlds in which they move. They order things and perceptions. They dispense opportunity for some, and discomfort for anyone not fully invested in their proper slot. But if categories need us and we need them, what scope is there for revision? If things fail, do we fail - in our identity performances, the value of our social contributions, our modes of being? Maybe a new hodgepodge can burst from the ruins.

Things That Art: A Graphic Menagerie of Enchanting Curiosities is published by University of Toronto Press.

Lochlann Jain is a biracial, non-binary, interdisciplinary academic. Their other books include Injury (2006), and Malignant: How Cancer Becomes Us (2013). Jain's work has been praised as "a remarkable achievement" (TLS), "a whip-smart read" (Discover Magazine), "brilliant and disturbing" (Nature), and having "the phenomenological nuance of James Joyce" (Center for Medical Humanities Review). Jain is professor of anthropology at Stanford University, and Social Medicine at King's College London. Jain has won numerous prizes for work in anthropology and medical journalism, including the Staley Prize, June Roth Memorial Award, Fleck Prize, Edelstein Prize, Victor Turner Prize, and the Diana Forsythe Prize. The work has been supported by Stanford Center for the Advanced Study of Behavioral Sciences, National Endowment for the Humanities Fellowship, the Wenner-Gren Foundation, and the National Humanities Center.
Share on Facebook
Share on Twitter
Download PDF