Work at Zed, own Zed

Kika Sroka-Miller, of Zed Books, tells Julie Vuong why the indie's radical model of collective ownership serves as a blueprint for a brave new world of publishing 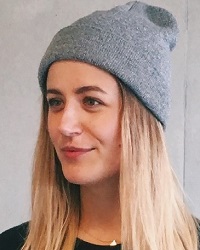 In 2015, news that Zed Books had evolved from a co-operative business model into a collective somewhat slipped under the radar. The paucity of attention was surprising, as Zed was the first UK publishing house to do away with hierarchy. The following year, after a rebrand and website relaunch, there was again little fanfare from the publishing world. The reason, according to Zed, was its deliberate policy of introducing the changes quietly until the time was right. Now that's about to change. As 2018 hits its stride and the political indie press begins to reap the rewards from its top-to-bottom restructure, Zed Books is ready to talk - bang the drum even - about how its egalitarian approach is paying off.

"Zed as you see it now did not exist before 2016; since we gained a new visual identity and online platform, we're more explicit about our model," explains Kika Sroka-Miller, Zed's brand director (right). "We didn't really shout about it before, and if we did, certain tranches of the publishing world were just not interested. Now we're ready to show off our uniqueness. In 2015, we made bold moves internally, but it's only been in the last 18 months that we could demonstrate how what we did made sense - and how our lives have been richer for it."

Sroka-Miller's assertion of uniqueness is no overstatement. Here's Zed at a glance: there are no employees, and all 11 members are directors; it's a flat structure with no hierarchy; everyone takes home the same wage (£40,000) and is given equal say in the business strategy. "Our model is the one thing people are most interested in, and rightly so. We're the world's biggest publishing collective: we don't have an md, publisher or ceo. We're financially autonomous and not owned by another press. The reason we do this is political. We don't have any assistants or interns, and we're quite fierce that if you work at Zed, you own Zed."

Radical from output to identity
Sroka-Miller was editor at the Royal Institute of Chartered Surveyors before joining Zed eight years ago. She has been a pivotal figure in pushing through the indie's new incarnation, believing Zed's radical political output should be reflected in its own everyday working practices. To honour fully its long legacy of publishing activist literature, such as Assata: An Autobiography by Assata Shakur and Woman at Point Zero by Egyptian feminist writer and activist Nawal El Saadawi, she believed that Zed's former co-operative model did not go far enough.

"Our content is political and so are we," she states. "The New Internationalist magazine is a co-operative, but so are Peter Jones and John Lewis; it doesn't necessarily imply that they are non-hierarchical operations. At Zed, we all have equal ownership - we are all publishers. We collectively decide what books we take on, whom to offer contracts to; we write the business plan and budget together. It does mean a different way of working. For instance, our finance and operations directors attend acquisition meetings, and they have as much say in the yes or no as anyone else. The result is that every title is genuinely owned by us all. And that's a big difference from the vast majority of publishing."

Set up in 1976 as a private venture by Roger van Zwanenberg, now majority shareholder at Pluto Press, Zed became a co-operative in 1989. "The change meant he signed over ownership to a certain extent," Sroka-Miller explains, "but until 2015 we still had an explicit hierarchy: we had a board - all elected, but a governing board nonetheless. On paper our set up sounded radical, and while we also challenged ideas through our content, we were not really doing so through our own model." Adapting an existing business had its challenges. "It was a very long process," she explains. "Some people took a pay cut to create the salary level the whole company was happy with; it's not for everyone, and a few left. But since then, we've had three new hires who are very much on board."

Commercial and personal gains
In an industry known for its established structures and processes, Zed is quite the one-off. "In the art world, collectively run galleries are not unknown; in publishing it's bizarre!" she smiles. "People don't like change, and we are definitely behind other creative industries. Some would accuse Zed of being a glorified non-commercial entity making books - that's why it was crucial that we demonstrated profitability. This is the challenge, and it's our main business objective for the next five years."

Better financial returns have also come with greater personal rewards. "The freedom it allows us as individuals is incredible," she enthuses. "Our core office hours are 10 to 4, but we're extremely flexible, and all of our job descriptions are objective-based. If these are being met, we encourage people to work how they want. I have so much more autonomy - and Zed is doing better now than when we had less autonomy! I can't speak for everyone, but this is, for me, one of the best things about working here. It's a real, authentic investment and everyone's attitude to work changes. It takes away that rigidity and obsession with process."

It is clear that Zed's idealism hasn't been to the detriment of commercial pursuit. "Before the rebrand we hovered at £1.2 million annual turnover for decades," Sroka-Miller says, "and now we've just recorded our best ever quarter. It is exciting and wonderful - and no, it isn't down to one bestseller. Personally I'm really happy about that, because we have relied on a different kind of growth and success. We've seen substantial and steady growth in all channels of the business and that's made us better organised. For instance, we changed our reps and database, working now with Bibliocloud."

No utopia
Sroka-Miller points out that, while the rewards are plentiful, there have been big challenges in becoming a collective. "I don't want to present Zed as some kind of utopia," she says. "One of the key things we had to consider was HR: recruitment here is pretty harsh! It's really important to get this right - we're recruiting for a partner essentially, not an employee. So it is an in-depth process, and everyone is involved. There are no longer employees and employers in the traditional sense, so HR is carried out by the collective. A way we address any concerns, relating to HR or otherwise, is once a month we have communications training. We bring ourselves and nothing else. We discuss how we talk to each other, give feedback and say what we want."

Sroka-Miller is excited about the 2018 list. "In May, we're releasing It's Only Blood by Anna Dahlqvist, which covers how global communities are shattering taboos around menstruation, while in October there's Back to Black by Kehinde Andrews, who was the first person to set up a black studies course in the UK - only last year if you can believe it! He sets out to reframe black radicalism to be more inclusive and intersectional. It's a method for addressing the inequalities in the West and beyond."

Sroka-Miller believes Zed has a role as an industry pioneer. "We need to shout about what we do more," she says, "such as how we have a gender pay gap of zero. It could really instigate change in the industry. I sometimes get frustrated by the talk of diversity in this and that, especially when nothing actually changes. Maybe it takes a few organisations, Zed being one of them and Tilted Axis another, to do some butt-kicking! Who knows, perhaps in 20 years' time we will have more indie presses making a mark and saying there's a different way of doing things."